Turkey has many modern and developed cities with their rich cultural roots as well as vibrant economic life and cultural mobility. Thanks to their geographic locations, many major Turkish cities have been considered as the economic and cultural hubs during many centuries, if not millennia. Only the great city of Istanbul had been the capital of two empires, namely Roman and Ottoman Empires, which has population of around 15 million people that come from many nations and backgrounds. One can consider Istanbul as mosaic of cultures that molded and shaped throughout wars and migrations of history.

As dazzling as Istanbul may be, there are many other cities in Turkey that needs to be given attention too. Cities like Ankara, Izmir, Bursa, Antalya are also of great importance when it comes to economic affluence and cultural life.

Despite the fact that there are dozens of cities in Turkey that needs to be covered, for the sake of this article and its limitations we decided to study the three major cities in Turkey namely Istanbul, Ankara and Izmir. The criteria we seek for is their economic wealth, standard of living, cultural life and of course climate!

Consequently, at the end of this article will make practical comparisons based on prices of the daily products and major expenses. We believe the information that we are about to provide will be of great importance for those foreigners who are looking for to relocate in Turkey.

Istanbul is the biggest and the most developed city of Turkey. It has the population of 15 million people and annual GDP of the city is around 156 billion USD (2019) surpassing many other countries. GDP per capita of Istanbul is 10,400 USD (2019). 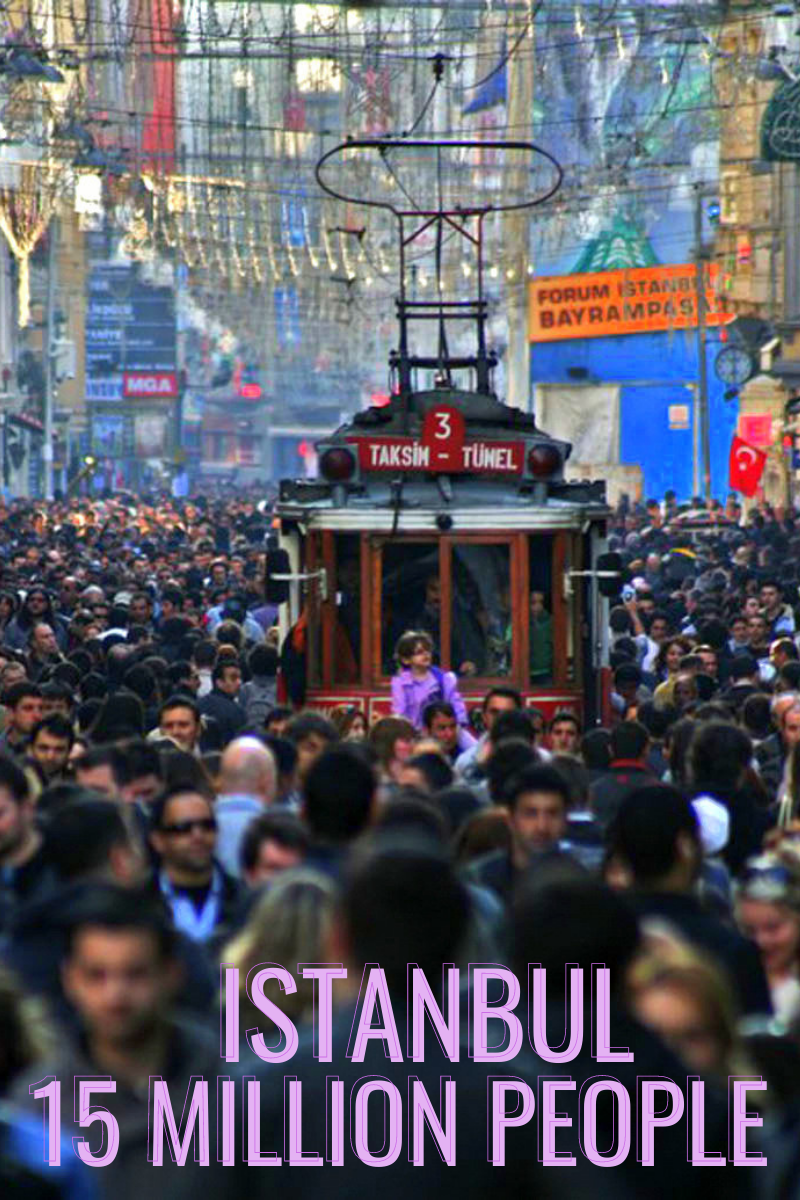 Istanbul is an economic-industrial center and responsible for Turkey’s %30 of industrial output. There is a saying in Turkish which goes like “İstanbul’un taşı toprağı altındır” literally meaning “Even stone and soil of Istanbul is gold”. There are many companies and factories that are operating in Istanbul in sectors such as finance, textile, glass, flour processing and automobile. Tourism also an important source of income for the city thanks to its history.

Cultural life of Istanbul is very vivid too. Tons of cultural events such as theater plays, concerts and exhibitions are displayed almost every day. Dozens of museums and historical sites that worth visiting are present in Istanbul. International events are very frequently organized in Istanbul too. So it is almost impossible not find something interesting to do in this great city.

Istanbul has cold winters with frequent precipitations, and in the summer it's rarely over 30 °C.

Tough the economic life is glaring, making a living in Istanbul is not without its struggles. Especially due to high rents and transportation expenses, many people turn to other cities to start a new life. One can easily observe that average rents for homes in Istanbul are not sustainable for someone making a minimum wage working on an average job. However, due to favorable situation of the foreign currency, Istanbul is still an economical choice for expats.

Ankara is the capital of Turkey. It's located at the center of the country. Ankara is always said to be the best  organized city and has a population around 5.6 million, making it the second-biggest city in Turkey. Tough the sizeable majority of the city dwellers are working in government service or related areas, there is still an important economic activity as well. Ankara has the annual GDP of 46.5 billion USD (2019) and GDP per capita is around 8300 USD (2019). Most important sectors are furniture manufacturing and some automobile companies as well as state owned defense and other related companies.

Ankara has many cultural activities to offer as well. Pioneered by state initiatives mostly, many theaters, concert halls as well as an opera can be found in Ankara.

Ankara has a very cold weather in winters with usual snowfall. In the summer, while it is hot in the daytime, nighttime is rather cooler

Due to affordable housing, easy transportation, high quality education and health institutions, Ankara can be classified as the city with the highest Human Development Index in Turkey. However, being a landlocked city makes Ankara less appealing for many outsiders. Still there are many foreigners working in Ankara in foreign embassies, international organizations and NGOs.

Izmir is the westernmost city of Turkey and can be considered as the center of West Anatolia. Izmir had been inhabited as a very important natural harbor by many civilizations and is still a crucial trade hub. It is the third-biggest city of Turkey with its population of 4 million.

Izmir is among the most important commercial cities in Turkey. It is the third-largest exporter and fifth-largest importer of the country. Turkey’s 1/5 of all exports are made via Izmir Port. Annual GDP of Izmir is around 31 billion USD and GDP per capita is around 7750 USD.

Izmir is among the hottest cities in the Turkey, where there is almost no snowfall and minus centigrade in winter and usually over 30-35 Celsius in the summer with rare precipitations.

Izmir has a very active cultural life too. There are many theaters, concert halls, sports complexes where cultural and sportive activities are held all year round attracting visitors from other cities and countries. 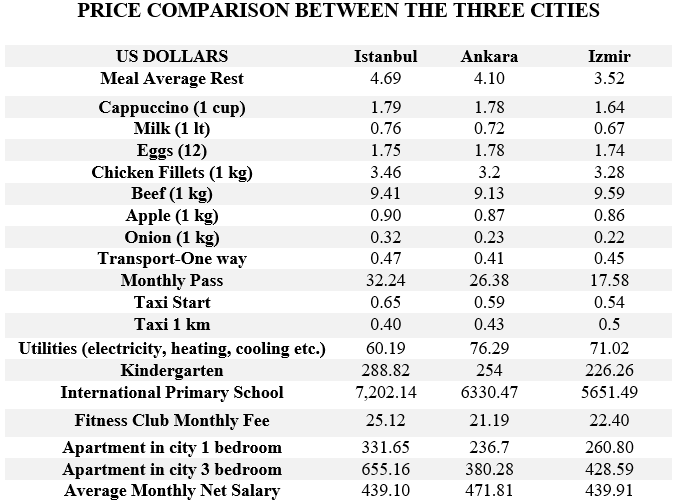 As can be seen from the chart above, all three cities have almost the same pricing in many units. Major differences are only observed in accommodation, transport and education expenses. After a simple study, Ankara can be seen as the most advantageous city in Turkey in terms of average salary as well as major expenses that mentioned above.   Nevertheless, all three city has its own beauty and advantages for every other person. Turkish Speakers in the World Emergency Numbers In Turkey: 112 and Other Helplines